Single-player and team games in virtual and augmented reality 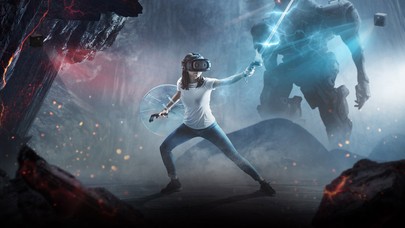 Games in the modern world have become an essential part of life, and all generations now spend time in front of consoles or computers. The graphics in the games have already reached a high level, but still something was missing for a full immersion. And here came virtual reality, which allowed you to literally place a person inside the game world and give him freedom of action.

Thanks to VR, the need to use many buttons in the gameplay has almost vanished, because the control over the character has become intuitive. Movement is carried out in the same way as in the normal world – with your feet; manipulations with the hands both of the character and the person are also synchronized, which significantly increases the convenience of control. You do not need to press 5-10 buttons at once, just perform the usual movement, and the game will recognize it.

In the case of dynamic games, there are even more advantages. It is much faster and more convenient for the player to perform a familiar movement with his hands or feet than to remember the button and then press it.

When you are using virtual reality, all the necessary data is displayed directly on the screen in front of the user’s eyes. You do not need to move your head and look with your eyes for how many lives, ammo, stamina, etc. are left, because all of this is clearly presented. In addition, it allows you to place more interface elements, but without overloading the visible area of the player.

Simplicity of exploring the world

With the help of VR, the user can “pick up” any object located in the game space. Moreover, he is allowed to perform various manipulations with it, for example:

All this makes it possible to study the game world in more detailed way, as well as its physics, which recently is almost as good as the real one. In this case, the maximum immersion in the process of passing is achieved, which significantly increases the desire to spend more time in the world on the other side of the glasses or helmet screen.

With the arrival of virtual reality, this type of entertainment can no longer be called passive. In most cases the user needs to be in constant motion to perform actions in the game space. This has a positive effect on the physical condition, especially in the case of sports entertainment, where the whole process resembles a real competition.